The Villa Asiola is centrally situated for the many tourist attraction in the area. It is possible to reach the well-known beaches of Grado and Sistiana in a few minutes by car. One can also visit other ancient communities in the vicinity (like Aquileia, Palmanova and Trieste) all with long historical and cultural traditions, and rich in architecture, art, monuments, castles and fortifications. The staff will always be happy to advise you of other places you may wish to visit. 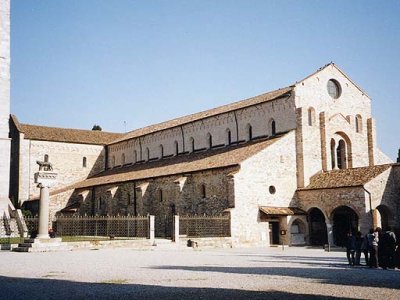 Aquileia was founded by the Romans in 180/181 BC on the narrow strip between the mountains and the lagoons, as a frontier fortress on the north-east, during the Illyrian Wars, as a means of checking the advance of that warlike people, not far from the site where in 183 BC Gaulish invaders had attempted to settle. The colony was led by two men of consular and one of praetorian rank, and 3000 pedites (infantry) formed the bulk of the settlers. Some scholars believe that Aquileia had been a center of Venetia even before the coming of the Romans.

It was originally a Latin colony, but became a municipium probably in 90 BC. Citizens were ascribed to the Roman tribe Velina. The customs boundary of Italy was close by in Cicero's day. It was plundered by the Iapydes under Augustus, but, in the period of peace which followed, was able to develop its resources. Augustus visited it during the Pannonian wars in 1210 BC and it was the birthplace of Tiberius' son by Julia, in the latter year.

In 1027 and 1044 Patriarch Poppo of Aquileia entered and sacked Grado, and, though the Pope reconfirmed the Patriarch of the latter in his dignities, the town never recovered, though it continued to be the seat of the Patriarchate until its formal transference to Venice in 1450.

The seat of the patriarchate of Aquileia had been transferred to Udine in 1238, but returned in 1420 when Venice annexed the territory of Udine. It was finally suppressed in 1751, and the sees of Udine and Gorizia established in its stead. 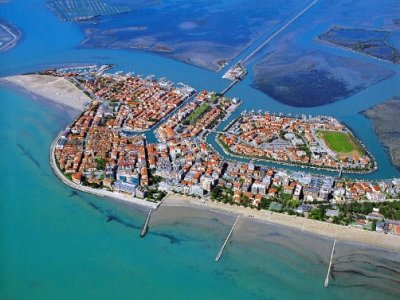 Once mainly a fishing center, today it is a popular tourist destination, known commonly as L'Isola del Sole ("The Sunny Island"), also famous because it is also a spa town; together with Marano Lagunare, it is the center of a lagoon, which is famous for its uncontaminated nature. Grado is the birthplace of Biagio Marin, a poet who sang about the island in the local Venetian dialect.

Quite close is the ancient Roman city of Aquileia; during the late years of the Western Roman Empire many people fled from Aquileia to Grado in order to find a safer place, more protected from the invasions coming from the east. In 452 Nicetas, Bishop of Aquileia, took refuge briefly at Grado; of the same period is the earliest construction of Grado's first Cathedral, the first church of Santa Maria delle Grazie, and the Baptistery. Grado was the home base of the Patriarchate's fleet.

The seat of the Patriarchate was transferred to Venice in 1451 by Pope Nicholas V. Reduced to a minor hamlet, Grado was sacked by the English in 1810 and by the French in 1812. Grado was handed acquired by Austria in 1815, to which it remained until 1918. 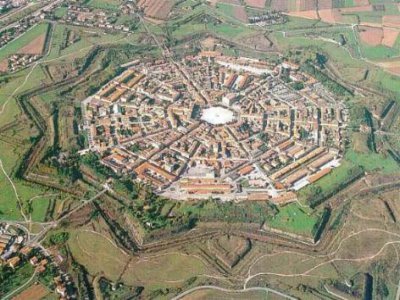 Palmanova is famous for its fortress plan and structure, called a star fort, imitated in the Modern era by numerous military architects.

On October 7, 1593, the superintendent of the Republic of Venice founded a revolutionary new kind of settlement: Palmanova. The city's founding date commemorated the victory of European forces (supplied primarily by the Venetian republic) over Ottoman Turks in the Battle of Lepanto. October 7 also celebrated Saint Justina, chosen as the city's patron saint. Using all the latest military innovations of the 16th century, this tiny town was a fortress in the shape of a nine-pointed star, designed by Vincenzo Scamozzi. In between the points of the star, ramparts protruded so that the points could defend each other. A moat surrounded the town, and three big, guarded gates allowed entry.

The outer line of fortifications was completed under the Napoleonic domination. From 1815 to 1866 the city was under Austria, and was annexed 50 years later to Italy together with Veneto and the western Friuli.

In 1960 Palmanova was declared national monument. 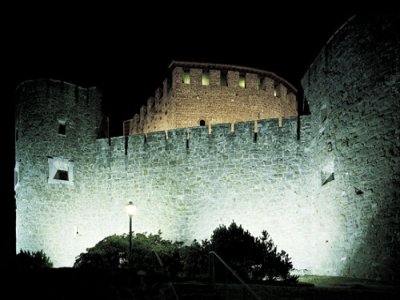 Gorizia (Slovenian: Gorica, German: Gorz, Friulian: Gurize) is a small town at the foot of the Alps, in northeastern Italy, on the border with Slovenia. It is the capital of the Province of Gorizia, and is a local center of tourism, industry, and commerce.

In Slovenian, Gorica means "little hill." The city is located at the confluence of the valleys of Isonzo and Vipava rivers. It lies in a plain overlooked by the Collio hills, which are renowned for the production of outstanding wines. Being sheltered from the north by a mountain ridge, Gorizia is not touched by the cold winds coming from there. And although the bora can blow from the east, the city still retains a mild climate. 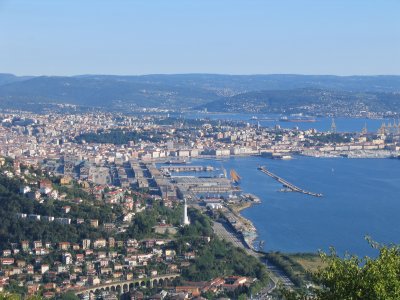 The area of what is now Trieste was settled by the Carni, an Indo-European tribe (whence the name Carso) since the 3rd millennium BC. Subsequently the area was populated by the Histri, an Illyrian people, who remained the main civilization until the 2000 BC, when the Palaeo-Veneti came.

By 177 BC, the city was under the governance of the Roman republic. Trieste was granted the status of a colony under Julius Caesar, who recorded its name as Tergeste in his Commentarii de bello Gallico (51 BC). After the end of the Western Roman Empire (in 476), Trieste remained a Byzantine military centre. In 788 it became part of the Frank kingdom, under the authority of their count-bishop. From the year 1081 the city came loosely under Aquileia's patriarchy, developing into a free commune at the end of the 12th century. After two centuries of war against the nearby major power, the Republic of Venice (who occupied it briefly from 1369 to 1372), the Triestins donated the city to Leopold III von Habsburg, duke of Austria. (The agreement of cessation was signed in October 1382, at the St. Bartholomew's church "apud Sisciam", the village of Siska, today one of the city quarters of Ljubljana.) The citizens, however, maintained a certain degree of autonomy well until the 17th century.

Trieste had grown into an important port and trade hub. It was constituted a free port by Emperor Charles VI and remained a free port from 1719 until July 1, 1891. The reign of his successor, Maria Theresa of Austria, marked for Trieste in particular the beginning of a flourishing era.

The city was occupied by French troops three times during the Napoleonic Wars, in 1797, 1805 and 1809. In the latter occasion it was annexed to the Illyrian Provinces by Napoleon. In this period Trieste lost in a definitive way its autonomy (even when it was returned to the Austrian Empire in 1813), and status of free port was interrupted.

Following the Napoleonic Wars, Trieste continued to prosper as the Imperial Free City of Trieste (Reichsunmittelbare Stadt Triest) and it became capital of the Austrian Littoral region, the so-called Kustenland. Its role as the principal Austrian commercial port and shipbuilding center was later emphasized by the Foundation of the Austrian Lloyd in 1836 and the construction of the Vienna-Trieste Austrian Southern Railway, completed in 1857.

After the constitution of the Italian Social Republic, on September 23, 1943, Trieste was nominally absorbed into this entity. The Germans, however, annexed it to an Adriatic Littoral Operation Zone, which included also Gorizia and Ljubljana and was led by Austrian Friedrich Rainer. Under the Nazi occupation, the sole extermination camp on Italian soil was constructed near Trieste, at the Risiera di San Sabba (Rizarna), on April 4, 1944. The city also suffered from the partisan activity and from Allied bombardments. 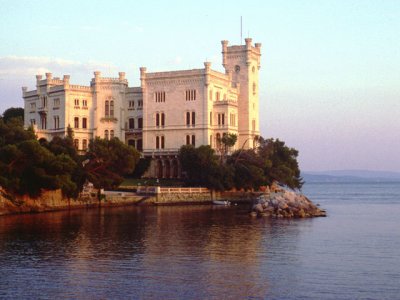 The Miramare Castle (Italian: Castello di Miramare; German: Schloss Miramar) is a 19th century castle, built for Austrian Archduke Maximilian and his wife, Charlotte of Belgium, on the Gulf of Trieste near Trieste, northeastern Italy. Construction took place from 1856 to 1860 to a design by Carl Junker on the orders of Archduke Maximilian.

The extensive park (22 hectares) is located on the seashore and was designed by the Archduke. The cliff it was built on, which had no vegetation whatsoever at the time, was cultivated with numerous tropical species of trees and plants

The Royal couple, who then divided their time between the duties of the court and their private lives but were soon to accept the benefits and burdens of the Mexican crown, spent a happy period here at the Austrian Riviera. Here, with the visit of a delegation from Mexico, definite plans were laid for the adventure that led to their undoing in the Americas.

The Castle, now a museum run by the Cultural Heritage Office, affords a panoramic view of the Bay of Grignano and the Adriatic beyond from atop a rock promontory. It is surrounded by an Italian-style garden, with flora (including rare species) from all over the world. There is also a marine park. 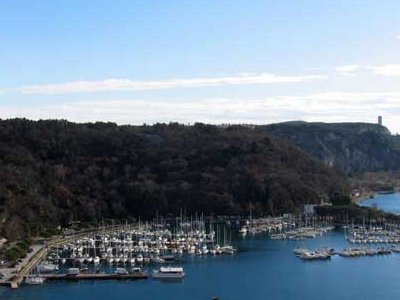